An early morning walk around the Reservoir produced six Common Sandpiper and Raven. Gull numbers have been building up in recent days as have numbers of Cormorants.

There was a report yesterday of a Black-necked Grebe at Shustoke so I went this morning to see if the bird was present. I scanned from the car park but couldn’t locate the bird. I decided to carry on round the Reservoir with just a single Shoveler (first of the autumn). From the west end a scan of the distant pylons revealed an adult Peregrine while the recently harvested field produced a flock of c.40 Linnet.

In addition there were two Common Sandpiper which I saw on a couple of occasions and c.50 Lapwing, there were also c.80 Great Crested Grebe. The only other bird of note was a Lesser Whitethroat.

I took my usual walk around the Reservoir and it didn’t look promising, there was little on the water and I could not pick out any waders along the shoreline. I started to make my way around and in the bushes at the edge of the car park picked up a large warbler bouncing around, I got on quickly to find I was looking at a Reed Warbler my first since the 28th August 2003!

The rest of the walk was uneventful with the wildfowl number pretty stable although the Gadwall numbers have risen to five birds.

Took Joy for a look at the Wryneck this evening and the bird was performing very well, we had half an hour and left the bird at the Mosquito’s took their toll again. 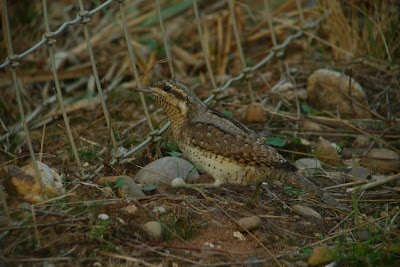 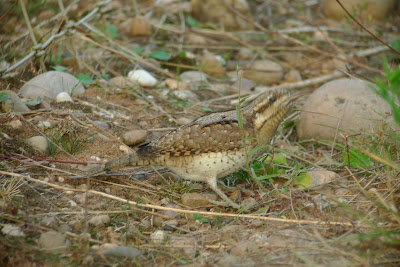 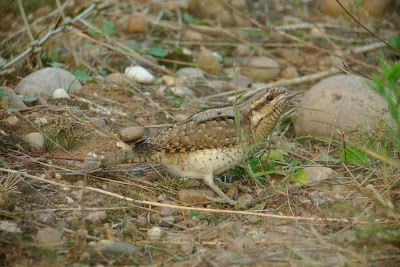 I had been around Shustoke in the morning but there was nothing of note.

News broke late morning of a Wryneck at Middleton Lakes RSPB, It was seen briefly at 11.00am but not after, I wanted to go but it was far too hot, so I though I would pay a visit early pm when it had cooled down.

At 5.00pm I ventured forth, but with little expectation that the Wryneck would show as there had been no news since the initial sighting. I walked out past the west screen were the bird had been seen and I searched thoroughly all along the fence line towards North Pit. Drawing a blank I went into the hide but apart from several Little Egret and a single Great Egret I had seen very little.

From the hide I saw Shoveler, Teal and a couple of Green Sandpiper, then a flock of 14 Snipe took to the air before landing again. At the benches I picked up two Garganey but they were badly backlit.

I followed the path to the East Screen where I met Julian and another birder. They had seen good number of Snipe and a Common Sandpiper but little else, then Julians phone went off, the resulting message was that the Wryneck was showing 200 yards east of where we were. We made our way quickly towards the East Screen and could see a small group watching something! Unfortunately we were looking directly into the sun, but a bird flew from the fence line into the Willows and it look about the correct size.

I was unfortunately wearing shorts and the insect life was getting a taste for my blood so I left before anyone else, when I got home my legs were like Pin Cushions. There are far better pictures available of the Wryneck but this was the best I could manage through my phone.

With a hot day in store Joy and I visited early, unfortunately not early enough, the Reservoir was rather busy, mainly with dog walkers. It wasn’t looking promising and for the first time in a while I couldn’t locate any Common Sandpiper. However, there were around 30 Lapwing and the same number of Cormorant.

We were about half way round when we picked up the call of a Greenshank overhead, I located above the Reservoir, eventually it just headed off in a southerly direction. Apart from a Kingfisher and a few common warblers it was a little disappointing.

I dropped in early evening and there was little change, but there was a single Common Sandpiper feeding in front of the Sailing Club.

A walk this morning was not fill with any great expectations, the wind has been in the west for a while and things have been quiet for a few days. I managed to locate a couple of Common Sandpiper feeding along the Reservoirs edge. An adult Hobby flew overhead whilst there was a youngster perched up on a nearby Pylon.

There were still two Swift and c.100 hurindines and an impressive 78 Great Crested Grebe. I checked out the fields on the north of the Reservoir but was driven mad by flies.
Posted by Pete Forbes at 17:34 No comments: