A couple of trips today with good numbers of the common warblers in family parties or mixed up with the roaming Tit flocks.

c.100 Swift were around in the morning with c.200 mixed hirundines enough to attract a Hobby which was unsuccessful in its attempt.

Kingfisher was seen twice and there was a single Common Sandpiper. Yesterday a family party of four Raven flew over.
Posted by Pete Forbes at 20:56 No comments:

Have been over the Reservoir a few times since my return from holiday, but it has generally been quiet. On Tuesday, however, although there were not many birds it was interesting.

A man pushing a pram who seemed to spend most of the time on the phone had not one, neigh not even two or three but five Pit Bull type dogs which were running all over the place. They were harassing other dog walkers, they were in the water and generally causing a nuisance. Fortunately they appeared good natured but the one girl who had been pestered look quite shocked, god only knows what they result might have been had the dogs been aggressive.

Anyway, back to birds, this morning saw me connect with Hobby for the first time this year at the Reservoir, but generally it was quiet, although c.150 Swift dropped in ahead of the rain.

Another day another walk, this time this was one I had been looking forward too as it was close to Perth and involved a good path straight to the col between the two hills.

This was a long way and the climb up the slopes of Creag Mac Ranaich was very steep, Joy was not a happy bunny. Fortunately there was an old fence which we followed and it had the semblance of a path besides it. There were three tops on the summit with the most northerly i.e. furthest away being the target. We decided to get the other hill out of the way before we stopped to eat so we made our way steeply down to the col.

The second hill was the highest of the two but it was much more straightforward and we were soon sitting at the cairn for lunch. Rather than cut the corner off and work our way through a mile of so of peat hag we retraced our steps back down to the path and arrived back at the car just before 5pm eight hours after we started. In total we did just over 40,000 steps during the course of the walk. Strangely it looked promising for birds but in actual fact apart from Meadow Pipit, Wheatear and a single Ring Ouzel we saw very little.

Picked Stuart up from his house in Carnoustie and we headed up the road to Fishtown of Usan, one of the premier sea watching spots in Angus, it lies just north of Lunan Bay and juts out into the North Sea as much as anywhere along this part of the coast.

We were straight away into a steady flow of Manx Shearwater, most of which were close and all heading north. Added to this was a steady stream of common sea birds with Fulmar, Kittiwake and Gannet all in good numbers. Added to this were 5 Bonxie and a single Arctic Skua. There were also a couple of Whimbrel added to the mix.

Conditions were dry but it was very dull and visibility weren’t perfect but as I always do I enjoyed myself.

Panoramic from the summit of Culardoch.

Today was one of those days where the birds were nearly as good as the hills. We were up at 7am and it was only about an hour drive to the Inverclaude Estate which lies around 6 miles east of Braemar. It was also unusual as the weather was stunning with hardly a cloud in the sky, fortunately there was a stiff breeze which help to cool us.

We parked up in the P&D car park at Keloch and within 100 yards had a couple of Scottish Crossbill there were numerous Spotted Flycatchers in the paddocks before the forest started, this wound its way uphill for a couple of miles before we emerged on the hillside. The track ahead of us was good and went up to the Beach Dearg which was the highpoint between the two hills.

We pretty soon saw a couple of Merlin which put on a show for us and enlivened the walk, after another mile or so we left the path and took a direct route towards the summit of Carn Liath and its other tops (all of a roughly similar height. We were at the summit in good time visiting the other tops and, more importantly for me we saw Dotterel and Ptarmigan.


The route to Culardoch was straightforward and the climb up was relatively easy and we were there in no time. There was a trig point which gave enough shelter for us to sit down and enjoy our lunch. The visibility was tremendous and we enjoyed really good views. All that was left was a good hike back out follow a good path. In total we walked nearly 38,000 steps by the end of the day!

A DAY OUT WITH STUART

I’ve known Stuart for over ten years now and usually manage to get a days birding with him on my trips north, this week would prove no exception.

We arranged to meet at his home in Carnoustie at 10am where we went to check out the the shore line at East Haven on the edge of Carnoustie. There were around 20 Dunlin but few other waders around. There were a couple of distant Arctic Skua out in the Tay and a couple of stunning Little Gull. A Wheatear would prove to be the only passerine of note, but it wasn’t really the right time of year.

After a quick coffee back at his we decided to try Barry Buddon a Military training area that juts out into the Tay narrowing the channel between Angus and Fife creating quite a fierce current. In previous years we haven’t been able to go here as exercises have been taking place and the “Red Flag” has been flying.

As we were in his car and not mine I realised that I had left my hat behind. I am still suffering a week later (did I get sunburn or what). We saw a reasonable selection of birds considering the time of year with Velvet Scoter, Common Scoter, 5 Grey Plover, Ringed Plover, Bar-tailed Godwits and more Little Gull.

The best was an unusual bird which I picked up, I wasn’t too sure what it was at first as it was rather distant but it turned out to be an albino Sandwich Tern, it was a youngster and was begging for food from adults.

With the heat and the near six miles of walking I was knackered by the time we got back to the car and for the third night I a row I slept like a log! 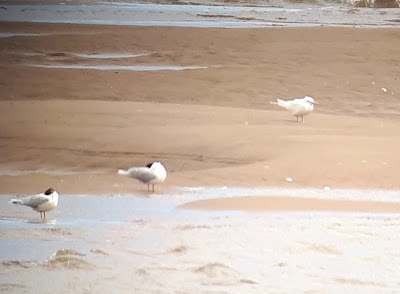 Up at 4.30am and left home heading for the Highlands, we reached Glasgow by 9.30am and where caught up in a jam caused by a five car shunt. We eventually arrived at the start of our walk situated on the A84 near Auchessan. I have been here in the past whilst climbing the Munro Meall Glas and the route follow the same path for the first couple of miles. Our target was off to the west and at the top of the path as it passed a lower shoulder of Meall Glas we headed west across an area of peat hag and rough going, we eventually got to an outlier Meall Garbh from where Being nan Imirean rising in front of us.

By this stage we were both quite tired and although it looked steep it wasn’t far away and we were soon at the top which afforded good views of the surrounding Munro's most of which we had climbed a long time ago. As we had still to drive to Perth we didn’t hang around and made good time on the way down to pick up the path to the day’s starting point.

Bird wise we saw very little, I have had Golden Eagle here before but apart from a couple of Wheatear and the numerous Meadow Pipit the hill was bare.

It would appear that the parking charges at Shustoke Reservoir has had an effect of reducing the number of visitors, certainly visitors using the car park. I have noticed that rather than pay a whole POUND people are parking in the residents lay-by just outside the gates. Also (as I have been there early) it seems to be gathering a reputation for overnight stays by camper vans.

Conditions, though look good, the water level is dropping fast and there is a good growth of blanket weed, which should, if left provide a bit of habitat for waders over the coming months. Yesterday I had my first Yellow Wagtail of the year – a stunning male. Whilst, later on I saw another Common Sandpiper. The Lapwing flock is up at c.80 birds and I saw my first Sparrowhawk on-site for a while.

On the negative side, where have all the Common Tern gone, over the last few years we have seen upto 40 birds summering and feeding the young, this summer I have only seen the odd bird and they don’t stay. Also I am yet to connect with Hobby a bird that in previous years are relatively regular.

Anyway off to Scotland for a week, to drag my increasingly weary body up a few hills.

A couple of walks today netted 50 species with the first Common Sandpiper of the Autumn. The post breeding Lapwing flock numbers c.50 and there was an Oystercatcher in the morning.

Although it is relatively quiet there are a few family parties with broods of Tits, long-tailed Tits and a brood of Goldcrest noted.

Kestrels have bred this year and the adults are feeding at least two young on the meadow by the railway line. There were a couple of young Green Woodpecker seen as well.

Butterflies were disappointing with only five species noted, the best of which was a couple of Comma Butterflies.

A few trips to Ryton Woods last week saw us see Marsh Tit, Sparrowhawk and Tawny Owl but we were really there for the Butterflies with Marbled White, White Admiral, Silver-washed Fritillary, Speckled Wood, Wood White and a few commoner species.

Saturday saw Joy, June and I travel the short distance to East Leake in Notts where there are around c.7 Bee-eaters summering at a local gravel pits. Although they were a little distant we got good scope views.