Took a walk around this morning and saw 2 male White Wagtail, the Ringed Plover was still there but there was no sign of any Ruff for the first time in two weeks. There was also a Common Sandpiper which has been around for a while.

The highlight was my first Willow Tit for a couple of years in with a flock of Long-tailed Tit behind the  small pool. There were two Swallow briefly and two Raven.

Earlier in the week I had my first group of Siskin of the winter with a small flock of around 16. There were also c.20 Swallow on Wednesday.

I am off to Shetland for a week and normal service will be resumed.

After having had my dog put down last night, I didn’t sleep particularly well so I was up early. A bonus for Joy was breakfast in bed! After 14 years of walking the dog first thing we decided that a walk around the reservoir would be a good idea.

There was still one Ruff and the Ringed Plover was still present (they must be fearless). There were three species of Wagtail including two Yellow Wagtail, one Grey Wagtail and around 40+ Pied Wagtail. Also there were five Shoveler. It was a bright morning so it was difficult viewing conditions but I might try and get over again later, I will be at a loose end again no doubt.

When round early on Saturday and saw four Ruff and a Common Sandpiper but the visibility was very poor. Later in the day the Garganey was seen as well as a Ringed Plover and a Greenshank (D Hutton).

I went around early this morning but the disturbance was amazing, dogs in the water people shouting at their dogs etc., etc. Amazingly there were still two Ruff and the Ringed Plover was also seen. I went back around this evening and the same birds were still present. Had a couple of Chiffchaff and a Blackcap.

I was working in the garden today and there was a Raven flying high nearly all afternoon calling he must have been nearly as knackered as I was by the time he had finished.

Popped in briefly and the Garganey was just off the car park showing really well, probably as I hadn’t taken my camera. There were still two Ruff in the same area – the others may well have been down the far end but this was just a flying visit.

Although I didn’t go over today the Garganey and the Ruff were still present. I had a little meeting planned with Little Stint at Middleton RSPB.
Posted by Pete Forbes at 08:48 No comments:

The four Ruff were still present as was the Common Sandpiper. New in were 9 Teal and a female type Garganey which was asleep on the causeway at the Sailing Club. Yesterdays seven Shoveler had dropped to two and the five Pochard had dropped to one. There were still five Gadwall present.

The only other significant sighting was a flock of c.20 Meadow Pipit which flew over and five Swallow.

I took a trip over tonight, and the four Ruff were still present, also there were a Redshank and a Common Sandpiper. There were seven Shoveler and five Pochard.

Also in the hedgerow by the sailing club was another Spotted Flycatcher, it has been a good autumn for this species in the area.
Posted by Pete Forbes at 20:28 No comments:

I had a relaxing ten days in Tenerife, didn’t do a great amount of birding – but enough. I managed to connect with all of the endemics and saw a few more birds besides.

Having got back from Tenerife (more to follow) I took a walk around the Reservoir on Friday evening. After a break of a couple of weeks there seemed to be more birds around. I counted nearly 40 Little Grebe and upto a 100 Lapwing on the South shore.

As I was making my way down the north shore something caught my eye landing on the shoreline behind me, I nearly dismissed it but decided that it was worth checking out, I made my way back and lo and behold there were two Ruff. This is practically the only wader species worth talking about this year, a year that has been particularly poor for waders. I left the birds and carried on only for them to fly  past me and land in the south-east corner. There were also a couple of Shoveler and the first Pochard of the autumn.

On Saturday I didn’t get around until late but there were three Ruff which were all showing really well. 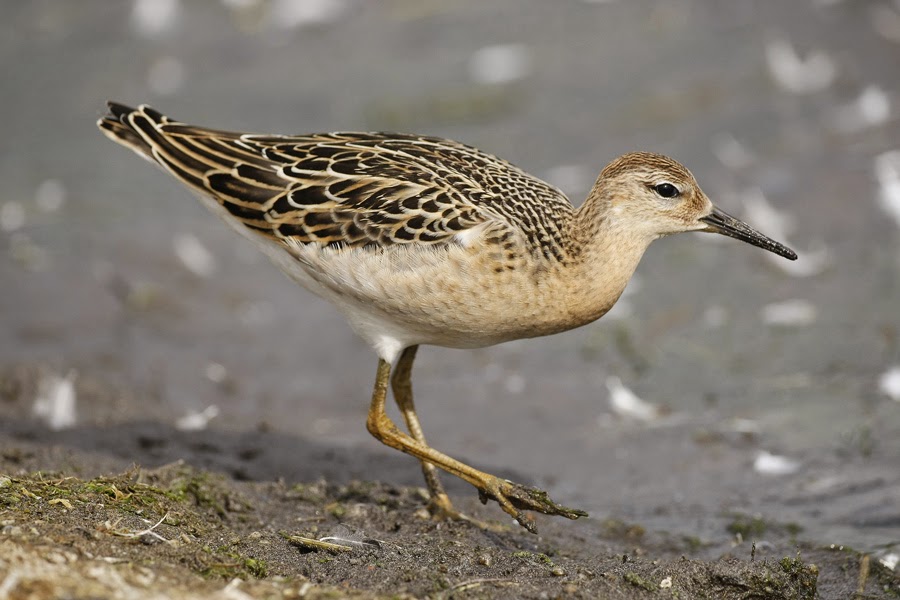